"...It's the absence of presence, nothing more...the endless time of never coming back...a gap you can't see, and when the wind blows through it, it makes no sound... 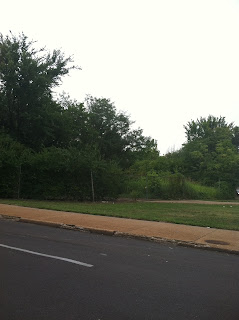 ...There must have been a  moment, at the beginning, where we could have said--no.  But somehow we missed it." - Tom Stoppard, Rosencrantz and Guildenstern are Dead
Photo courtesy of Kay Vickers
Posted by Walton at 11:02 AM No comments:

“School is built on the sweat of the idiots.”
“Literacy is really hard.”
“I invented Electracy.  It’s in Wikipedia.”
“Part of my creative secret is I misunderstand my own notes.”
“We are some stupid animals—on the fringes of nothing.”
“Theory is what you do when you don’t know what you’re doing.”
“I don’t want anyone having more fun than I am.”
“I got retirement; you all are doomed, though.”
“We each bring our own little grain of sand to the pile…to prevent beach erosion.”
“If that’s your problem, you’re not doing it right.” (on rocketships to heaven)
“Wikipedia’s got a pretty good thing on pepper.”
“The apes are sitting around asking ‘what are we going to do with junior?  He doesn’t have any hair, he’s walking upright, asking a lot of questions, won’t eat his bananas.’”
“See that?  See what happens?  You got all uppity and became unheimlich.”
“…old people, its part of their operating system.” (on the sacred)
“…doing physics like you’re three months old.” (on memory and emotional association)
“I can spend fifty years meditating, or I can just take a hit off the bong.”
“…mathematic procedure and madness comes down to the same thing in practice.”
“Will you just walk out of Walmart, right now?  Just put down the blender.”
Posted by Walton at 3:45 PM No comments:

[strophe - a turn or division]

It finally happened.  There I was, minding my own business (well, my own beer), when I finally had an epiphany of my very own.  It was bound to happen—it’s fatality, after all.
I’ve been agonizing for days over my Prezi.  (Todd can attest—he’s seen me sulking around top floor of Rolfs like the ghost of Hamlet Sr.)  I just couldn’t make the damn thing come together, find the logic of the immanent trope.  So there I was, hunched in agony (competition with the object—who will prove more resourceful?) over my computer, when I finally found a tropic tangent.
In the later days of Pruitt-Igoe, broken glass was a conspicuous feature: cascades of shattered beer bottles filled the ground that originally promised ‘a river of trees’; more significantly, one of the buildings’ most prominent features was its busted-out windows.  Broken windows—a sign of fatality.  We’re all intimately familiar with this phenomenon.  It’s the scourge of the personal computer—the fatal error—a sign that Microsoft Windows has tripped over its own formality.  Pruitt-Igoe as a signifying accident is the very same as the blue screen of death.  This, of course, leads marvelously into Lev Manovich’s theorization of the new media screen, providing a convenient inroad into digital technology, a persistent parallel to modern architecture in my blog.
I hypothesized, early on, that the disaster was the organization of space.  The notion that suspicion and defection were emergent properties of the layout seem to corroborate this.  Pruitt-Igoe promised the American Dream of the mid-century.  The project arose as a result of flight to the suburbs, to the white picket fences of middle-class America.  Pruitt-Igoe was an urbanized version of the white picket fence neighborhood—‘vertical neighborhoods for poor people’, to quote Architectural Forum (and the scary thing is, these were words of praise).  The social disintegration seems to me a form of mass brinksmanship; if this barren, inhospitable space masquerading under a human metric was the best that the American Dream was going to offer up, the only option was to call its bluff.
Posted by Walton at 11:39 AM No comments:

The search for science has led me back to Le Corbusier's Le Modulor.  The standard scale of modern architecture, this is the metric of Pruitt-Igoe, the science behind the space.  In the pursuit of a "living-machine" that takes the human as its measure, Yamasaki created an unlivable-machine.
We get a break on this one; the science already shows its fabrication.  The standard for modulor was changed ex post facto, from 1.75 metres to 6 feet, from the height of the average Frenchman to the height of good-looking policemen in English detective novels.
As previously noted, modulor is homophonous with modular, synonymous with infinitely repeatable design, like the homogenous blocks of Pruitt-Igoe.  Modular housing itself is prefabricated structures that can be moved; in the case of Pruitt-Igoe, the buildings weren't modular, but the design (based on the Modulor) assumed that its residents were--that humans can be picked up and deposited into prefabricated spaces and philosophies.
Posted by Walton at 10:55 AM No comments:

One thing that play and ‘pataphysics have in common is the ‘as if’; in play, this is the creative paithia, play without formal rules but organized by the principles of an imaginary world.  ‘Pataphysics is founded on this principle, creating an imaginary science of the world constituted by ‘as if’.  Both paithia and ‘pataphysics willfully forget history and experience in favor of constructing their own reality.  ‘pataphysics has certain rules, making it more ludic in nature, but ‘pataphysics maintains its playful character by developing the rules of its own methodology, granting greater freedom and creative latitude than in normal science.
I return to Danielewski’s House of Leaves as a point of intersection for a variety of themes I’ve been following.  The book, as noted before, uses the trope of recursion, and it does so in two ways.  First, the book represents itself as a diegetic object, as a book that the protagonist finds and reads.  Moreover, the impossible architecture of the house (unbound by space and time—an impossible physics, an imaginary physics, a ‘pataphysics—see also Turlington Hall) is reflected in the impossible architecture of the book itself (the house of leaves).  The book is the house that is the book.
Moreover, House of Leaves presents itself as a found manuscript, like Hawthorne’s The Scarlet Letter. (The book also contains various other found manuscripts en abyme.)  This seems significant in light of Todd’s enlightening lecture, wherein he suggested the possibility of the hoax, pure simulation, as a route for our projects.  We want the realer than real to expose its own constructed-ness as well as that of the cultural doctrines we take for granted.
One example is The Blair Witch Project, another ‘found manuscript’, that needs no introduction.  An important, but little-known, paratext is the Sci-Fi Channel special “Curse of the Blair Witch”, presented as a documentary about the making of, and events surrounding, the found documentary (and aired in advance of the release of the film itself).  This was in the days before Sci-Fi switched to all-camp-all-the-time and still ran shows like “Sightings” which took a very serious approach to parascience.  A documentary about the weird circumstances surrounding a group of missing students, complete with dated news segments and interviews with Burkittsville locals, was indistinguishable from an actual documentary report.
Another example of the found manuscript is the Canadian “pataphysicians’ approach to reading the natural features of the landscape as interpretable signs—similar to reading accidents as signs, reading natural history as an accidental text—or perhaps accidentally reading it as a text.
Which brings me to the point that started me thinking about found manuscripts.  HP Lovecraft is famous for his universe of impossible physics (like non-Euclidean architecture and forms), and a key component of this world is the Necronomicon, adapted from the original title al Azif.  A popular prank amongst Lovecraft aficionado, back in the days of analog libraries, was to sneak cards for the book into official catalogues.  Several versions of the Necronomincon have actually been printed, among them a version edited by a man called Simon, which also presents itself as a found manuscript.  Despite the fact that Lovecraft himself averred that the book was pure invention, there are readers who legitimately practice magik with the book’s symbols and spells.
‘As if’, a la al Azif.
Posted by Walton at 11:31 AM No comments:

An Imaginary Science of Poetics

As noted, Ault’s is a critical approach, not an artistic one.  Reading it as a ‘pataphysics is a willful misprision, but one that gestures toward developing an imaginary science of poetics—that is, a creative empirical methodology that looks for certain tropes. (The two can be thought of as parallel constructions, roughly analogous natural carbon-based life and NASA’s arsenic-based life.)  Not a science in the essentialist mode, but as suggested by the word’s etymology: the scientist is the knower, dividing a portion of chaos into meaningful order.  It becomes an essentialist science when the knowledge is divided from the knower, it informs rather than inspires.  This is the difference between theory and criticism (hermeneutic and heuristic): theory explains an independent object, criticism provides an individual understanding of it.  Creativity is not a means of revolution, but a constant imaginative activity.
My goal is to outline certain tropes that will allow us to identify complex texts that are self-aware, ‘objects’ in states of ecstasy.  (A shortlist is given at the end /Part 1, some of which are used as examples here.)  I have previously explored how this sort of self-awareness is both the holy grail and Achilles’ heel of techno-scientific enterprise: the respective myths of the Singularity and Aronofsky’s Pi.  This exploration will hopefully contribute to my ultimate goal of developing a trope for the Pruitt-Igoe accident.
Self-Reference:  Direct, immediate reference of something to itself. “This statement is self-reflexive.”  Key to the Epimenides paradox, “This statement is false.”

Reflexivity:  Awareness or reflection of medium or embodiment within a medium.  Scott McCloud’s narrator-persona is reflexive of his imagetextual environment, which makes Understanding Comics a self-reflexive text. (As a comic book about comic books, this is an example of Coleridge’s organic form, which is married inseparably to content.) 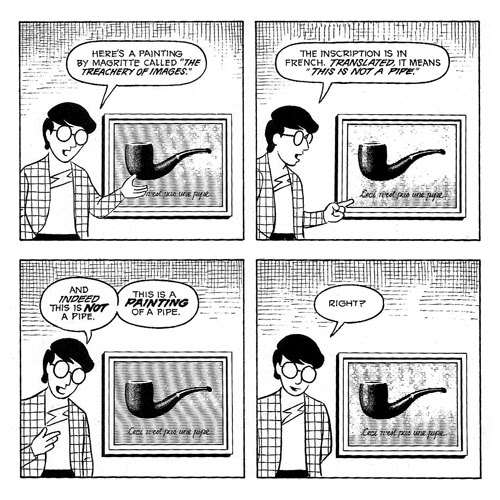 Recursion: Self-representation of a text or  -reproduction of an image.  Fractals are probably the most well-known example.  The infinite regress is (in my own experience) frequently interpreted as either a mysterious eternity or an existential abyss.  Text constrains recursion from falling into infinity because such a text would itself have to be infinite.  Recursive representation in text usually involves representation rather than reproduction; embedding is more functional as mise en abyme. 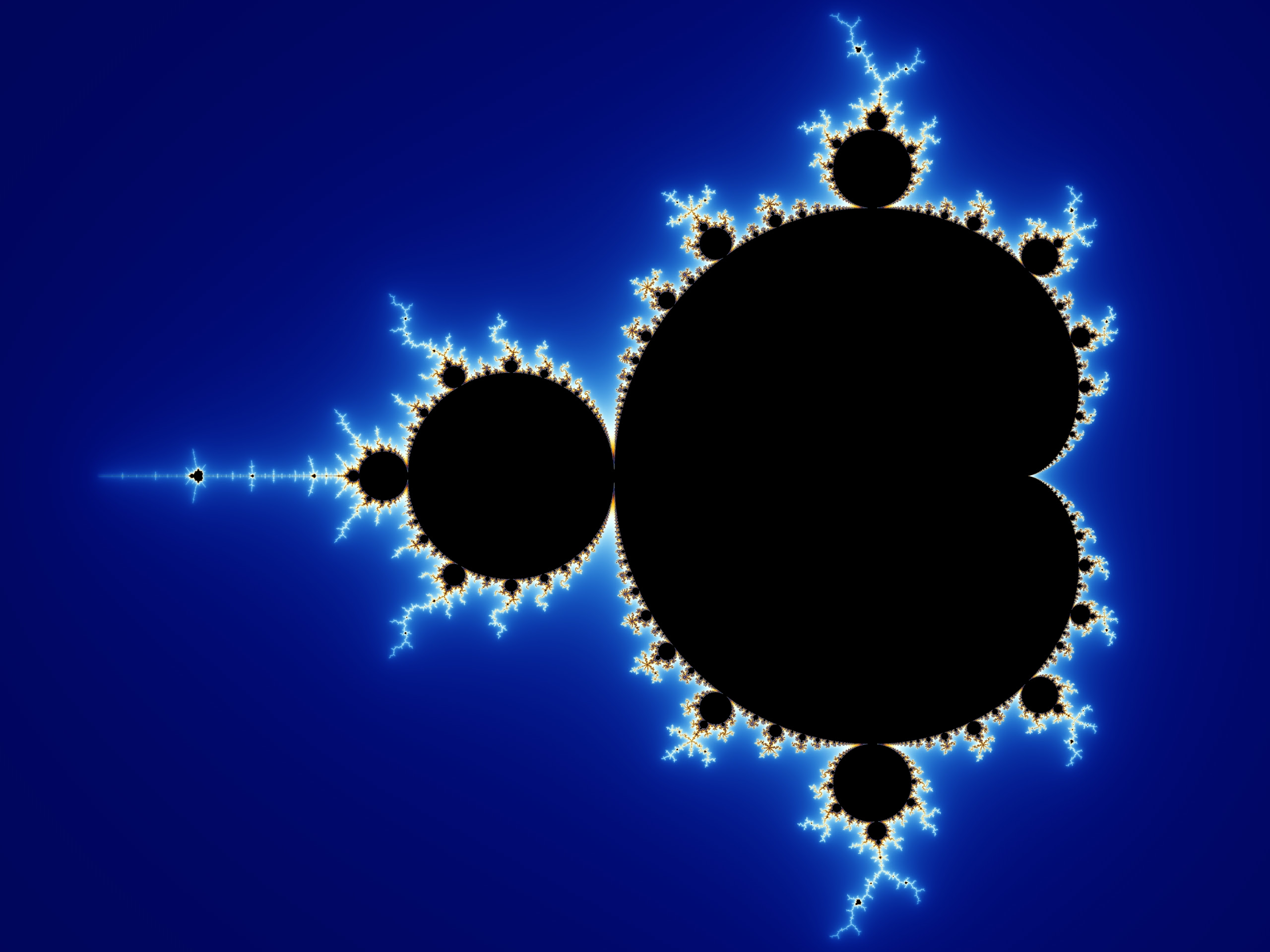 Mise en Abyme: Embedding a form within a form, without the paradoxical content-repetition of recursion.  It is similar to reflexivity, as it is also a self-reflection, but of metaphysical rather than physical form.  Differences expose similarities, relations, forces at work in the meta- and embedded texts.  In South Park: Bigger, Longer, Uncut, the embedded film Asses of Fire and its relation to the dominant narrative mirrors the reception of South Park into its own cultural metanarrative.  Shakespeare is also frequently noted for his plays-within-plays, which can range from formal theatre to general playfulness.  (Yes, Hamlet and South Park have something in common.)

Some Tropic Fugues
Blake’s Book of Urizen blends recursion and mise en abyme by representing itself and briefly recapitulating (a transformed version of) itself as an embedded narrative.  Joyce’s Finnegans Wake reverses this blending by representing itself under transformation, as Shem’s manuscript.
Posted by Walton at 11:31 AM No comments: